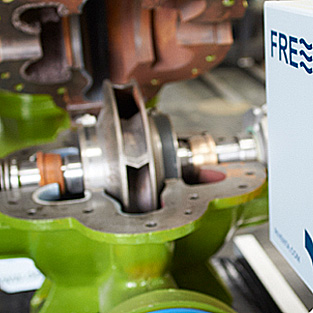 Using a patented system, we solved a lasting problem at one of our client’s pumping stations.

This consists of three variable speed pumps supplying raw water from a reservoir, direct to the Water Treatment Works. We were asked to test the pumps as part of a wider programme across many sites for our client.

At the reservoir, two pumps had different manufacturers to the third and as such could not be assumed to operate in the same way. The variable drives were also obsolete and, prior to the project, it had not been possible to obtain any information about the electro-mechanical efficiency of the motor and variable speed drive arrangement. Informally we had been told that pump three consumed more energy, while station SCADA data showed confusing variations in cost per mega-litre. Our client had been unable to pinpoint what was happening and why.

We used innovative measurement techniques and our patented software algorithm to gather data and identify solutions.

To monitor all three pumps over an eight-week period we used both our conventional pump testing system and thermodynamic instrumentation. Being able to deploy both methods together is part of our unique offering. In this instance meaning we could measure motor and drive efficiency, essential to solving the lasting problem at the reservoir.

Their patented software algorithm at work

Due to the physical setup of pipework at the reservoir, a flow meter could not be placed on each pump. Using our patented algorithm we were able to use one flow meter on the common suction pipe work and, with 100% accuracy, divide this measurement into the contributing flow rates for each individual pump; essentially placing a virtual flow meter on each pump. As a solution, we decided to use one flow metre, connected to the common inlet main that was able to measure total flow.

The central flow meter synched with our patented software to effectively create a virtual flow metre – the algorithm for which was able to take the total flow and divide this amongst all of the pumps to give an accurate reading for each one.

We then calculated parameters for each pump:

Importantly, data showed that information about pump three wasn’t true at all. In fact, we were able to reveal specific characteristics of the variable speed drive, showing its designed efficient operating region did not coincide with the best efficiency point for the pumps. There was a fundamental mismatch in characteristics and an inefficient design.

By analysing the specific power of the station revealed the opposite result, however. This showed that parallel pumping operations result in around a 34% rise in operating cost of the station.

Evaluating the electro-mechanical drive efficiency of the variable speed drives and the motors we also demonstrated a significant increase in cost when running motors at lower speeds.

Based on our data, the above offered some quite dramatic revelations – all of which then needed to be acted upon. So, to evaluate the optimum trade-off between hydraulic efficiency and electro- mechanical drive efficiency, a scheduling analysis was performed.

The data collected from our pump monitoring period enabled us to calculate variable speed drive efficiency and identify some peculiar points in the way the station’s pumps worked.

The results in full

We ran scheduling analysis over existing practices and to reveal the best way of working across all pumps.
• Pump 1 operating solo needed to be run up to 850 rpm.
• Pump 3 operating solo should only be run up to a max of 714 rpm.
• Any flow required (below that delivered by pump 1 solo at 850 rpm, which during the data capture period was 1112 l/s), should be met with solo pumping operations only. Any parallel combination operation at flows below this threshold would result in higher running cost.
• Any flow required above the aforementioned threshold should be met using a parallel combination of two pumps, as operating a solo pump above this would result in higher operating costs.
• Parallel operation of all three pumps at the same time should never be used as this would yield higher running costs

Using the above recommendations it was calculated that the result would be an annual saving of £56,070 (21.7%).

Furthermore, pump 2 had shown signs of wear and warranted refurbishment, which would result in an estimated annual saving of £8,293 (10.7%). The cost of refurbishment was estimated to be £30,000, a pay back of 3.6-years.

The resulting next phase of work:

While the above results signalled the end of pump testing at the reservoir, our revelations have initiated a further phase of work to more closely examine how the best efficiency points of the pump and drive could be aligned through remedial engineering works. To devise the work programme to achieve this, the pumps are being analysed as part of the entire network that the reservoir is a part of. We are currently instrumenting the network to conclude on engineering changes and adjustments to pump impellers, estimated to achieve 49% in savings.