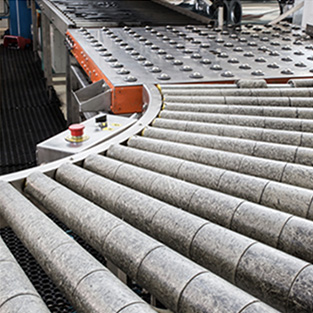 “To return to production in only 19 hours after such a serious incident was a fantastic effort by all the teams here at site. I’d like to thank the engineers from Deritend who joined us promptly at no notice. Without their help and support, the lost time would have been significantly higher.”

Our client is a leading international consumer packaged food company. With its headquarters in Canada, the business established a UK manufacturing base in Yorkshire in 1996. It now operates from a total of six sites in the UK, employing around 1,200 people. Deritend have worked at our client’s production facilities across the UK, providing a range of tailored asset management and maintenance solutions designed to help keep the business’ operations running smoothly, efficiently and safely. As part of this strong relationship, Deritend’s 24 hour emergency repair service has proved critical for them, helping them to minimise the huge cost of operational downtime.

In November 2011, a prover at their Yorkshire plant stalled and stopped at 6am. This equipment is central to the facility’s production process, and its arrest had serious consequences. Operations were abruptly halted and no products were being produced and packaged: the cost implications were huge and stacking higher each hour that the prover was inoperative and the plant was effectively off line.

Their team investigated the equipment and found that a number of the prover’s boards were out of place and were jamming its exit point, and that the swings which hold the boards had become twisted in various places.

It was crucial that the problem was rectified safely and successfully, with the boards removed, the swings repaired and the prover back up and running smoothly as soon as possible. It was also key that measures were taken to avoid a recurrence.

Deritend was called on to provide emergency assistance, and the firm’s national network enabled specialist engineers to arrive promptly on site – within two hours of being called out – to work alongside their team.

In order to remove the boards and the affected swings safely, two of the prover’s wall panels were removed. At approximately 8am – just two hours after the prover failed – the first of the boards were extracted from the prover. By 5pm, approximately 60 boards and 12 swings had been taken off the prover for repair and cleaning, or to allow safe access to other affected boards. This was a huge undertaking which needed to be managed and carried out with great care and attention, as well as efficiently and quickly.

Our teams worked together to identify the root cause of the failure, a swing guide that had been damaged out of shape and was slightly out of alignment. As part of the rectification plan, the guides were repositioned and strengthened, and all other similar guides in the prover and retarder were checked to ensure further failures were avoided.

The engineers began to re-introduce the repaired boards to their correct position in the prover at 6pm. After testing the production line, mixing started again at the facility at 1am, and packing bagels began again at 4.15am. The total downtime from this major incident had been kept down to 19 hours. Deritend worked closely with our client to ensure a swift and successful emergency repair which reduced the impact of failure of critical equipment, keeping the hefty cost of operational downtime to a minimum.