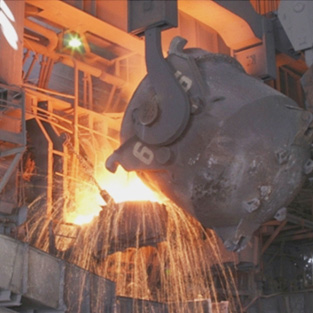 In late December 2014, we were called to go inspect the hot leveller gearbox at a steel forge in Scotland.

The inspection revealed that one of the seven output pinion shafts had sheared and one other output pinion shaft teeth were damaged. All of the output drive end white metal bearings were damaged and were also oversize. Due to time and production needs, we removed the snapped shaft and the shafts white metal bearings so that the gearbox could still run with six output shafts and production could still go ahead.

In early 2015, the bearings that were removed from the sheared shaft in December were brought back to our Middlesbrough facility for inspection. Measurements were taken of the bearings and recorded so that seven new bearings could be made ready for the summer shutdown as recommended in our inspection report to our client in December.

In July 2015, we went back to our client during the three week summer shutdown to rectify all the issues that were found in the last inspection report and to carry out a more in depth inspection of the rest of the gearbox. Over the three week shutdown all of the seven output drive end white metal bearings and the two output pinion shafts were changed. After a more in depth inspection was carried out, two other output pinion shafts were found to be eccentric due to torsion from the leveller. The distorted shafts had to be sent away for machining to achieve concentricity before the bearings could be fitted.

Crack testing was carried out on all the gear wheels, pinions and casing bolts to ensure that there was no fractures in the teeth or threads. Once all the crack testing, machining, cleaning, dressing of gear teeth and the bearings were “blued in” the gearbox was re-built and tested.

The testing of the gearbox was successful and the work was completed within the time scale given, this meant that production could start again on time.